On September 13, 2007, LT Jason Redman’s Navy SEAL Assault Team came under heavy machine gun and small arms fire and he along with two other Teammates were wounded in the ensuing firefight. Despite being shot twice in the arm and once in the face, Jason and his Team fought valiantly winning the fight, ensuring everyone came home alive.

While recovering at Bethesda Naval Medical Center, Jason wrote and hung a bright orange sign on his hospital door, which became a statement and symbol for wounded warriors and millions of people everywhere.

Jason wrote his Sign on the Door to lead himself out of crisis and into a future he loves. We challenge you to write your own using Jason’s Pointman Principles.

…been featured on countless national news outlets and captured in stories.

Choosing to do something greater than yourself that makes others better and leaves a visceral impact on them.

Impact is achieved by finding your passion and purpose.

Impact is found by devoting time, effort, and discipline to that purpose until you become recognized for it, and others want to learn from you. Impact is truly realized when you share what you have learned to make others better. This is impact and legacy.

You don’t have to be famous either.

You don’t have to be a Navy SEAL who got shot up in an ambush like Jason. You can create impact with your friends, family, kids, co-workers and community.

Jason’s impact started in that hospital bed at Walter Reed and it’s grown ever since…But it didn’t start with a wish or desire. It started with positivity, discipline, commitment and action.

It was a choice.

Everyone has the same choice.

Jason had the Sign on the Door framed and donated it back to the hospital to continue to motivate and inspire the warriors and medical staff who are there.

The Sign on the Door currently hangs in the center of the Wounded Ward at the Walter Reed National Military Medical Center.

What will be your legacy?

It’s never too late to create impact and start a legacy. So go, do it. What are you waiting for?

Get off the ❌, overcome and go write your own Sign on the Door! 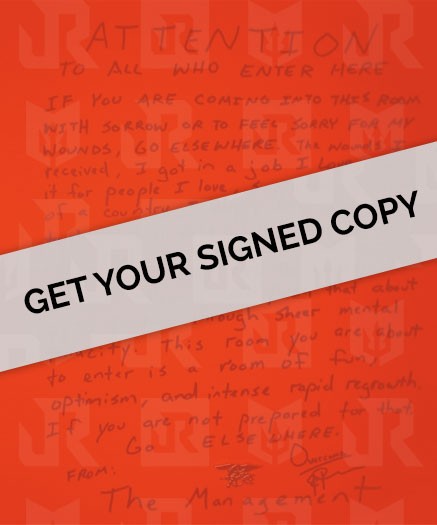 Purchase a signed copy of Jason’s Sign on the Door!