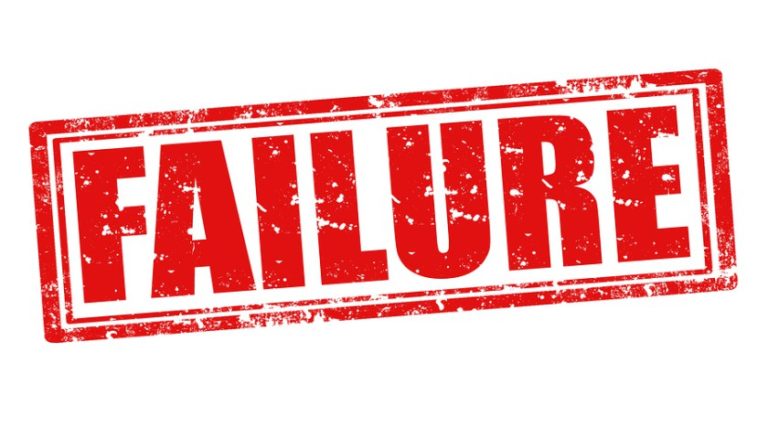 F is for Failure

People who don’t really know me may be shocked to hear I have sustained some major failures in my life; personally, in my military career and in business.  You see, despite all my great successes – I am a Failure.  And I am glad I am a Failure.

The number one question people ask me all the time is how to develop a strong Overcome Mindset.  The relentless overcome mindset is built on thriving through extreme physical and mental adversity, pushing yourself outside of your comfort zone and refusing to quit.  There is only one situation that totally immerses you on all three fronts – Failure.  (Well, SEAL training too but that may be too far a leap for most people.)

Major failure forces you to either get strong and overcome or wither up and die.  Failure hurts.  Failure is physically and mentally painful.  Failure causes massive amounts of stress and strain.  Failure can damage relationships and our reputation.  Because of all the above, people are terrified to fail.  So, they live cautiously, never truly pushing the limits.  Never pushing out of their comfort zones.  Afraid to take great risks for great rewards because the fear of failure is too frightening.  If you show me someone who has never failed, I will show you someone who has never truly pushed themselves and has the potential to crack if they ever encounter a life’s ambush.  Because when we push to the edge, outside of our comfort zones, there is always a chance we can fall off …. And Fail.

Now let me let you in on a little secret.  Failure has been an integral part of building my relentless overcome mindset.  Failure has set me up for success.  And if you truly want to be better; if you truly want to live greatly and build that mindset – embrace failure.  Stop worrying about the pain and suffering that will come if you fail.  Stop worrying about what people will say if you fail.  When I interview people now, I always ask them to tell me about a time they failed and how they recovered.  I could care less about all their successes.  I want to know how you built yourself back up after failure.  That tells me who you truly are.  This is why kids today are struggling to assimilate in the real world.  We are not allowing them to fail.  We coddle and protect them all the way through college and then they get into the real world and fall apart.  Embrace Failure.  Let your kids learn to fail.  Because out of failure they will learn to overcome.  For every failure I’ve had, I had to dig deep and overcome it.  I had to deal with the pain.  I had to deal with the mistakes I had made.  I had to reevaluate myself and figure out – what caused the failure? Was it me or external causes.  Failure makes us come to grips with all of that.

So, if you are reading this and are going through Failure right now; Congratulations, you are on your way to becoming a stronger, better, more successful leader.  Great leaders speak from experience and the greatest teacher is failure.  We learn the most from it.

Now that we have talked about embracing Failure – Here are the three rules to overcome failure.

Rule # 1- Accept you Failed and figure out what caused it.

My biggest failure was as a young arrogant SEAL leader – And that one failure led me down the road to multiple others.  Instead of accepting it, I fought it and refused to take responsibility for it.  Once I accepted I had failed and owned it, I then was able to figure out what caused it, both internal and external, and how to fix them.  (Free hint – Overcoming Failure takes humility)

When you fail – you will learn who your true friends are; they are the ones who will stand by you and help you get through it.  The others will try to either avoid you because you have that infectious disease called failure or they will try to hold you on the bottom.  Either way – Fuck them.  You and Only You can lead yourself out of failure.  For those hardliners that want to hold you as a failure forever – just accept you will never change their minds.  But for every single person who will never “forgive you” for your failure, there are at least ten others who will respect you for failing, owning it, learning from it, and moving past it.

Small incremental gains forward eventually lead to big successes.  The Japanese have a name for this – It’s called the Kaizen Principle.   If you wallow in your failure and never regain forward momentum, you will never get past the failure.  In the military and in life we will encounter ambushes.  Major failure qualifies as a life ambush.  Life ambushes are no different than real combat ambushes.  You have to get off the X.  You have to get out of the immediate danger area.  You have to fight forward.  Too many people stay in the ambush, on the X, in their failure….. and die.  I almost did this with my failure as a young leader.  I sat on the X convincing myself I could not move forward out of the ambush because I convinced myself people would never follow me again because of my failure.  The best leadership advice I ever received said – People will follow you if you give them a reason to, and I did.

So, accept you failed and own it.  Ignore the haters.

Get off the X, move forward and give both yourself and others a reason to follow you again.