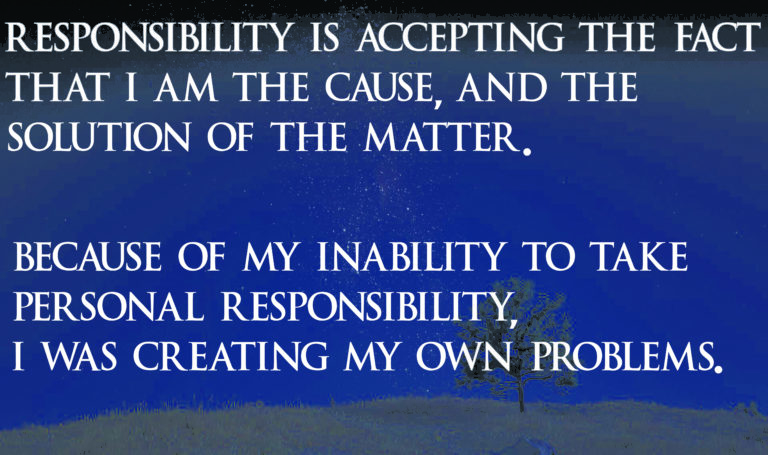 Things go great sometimes. A lot of the time. But also, things go wrong. We will fail at times. What we do what that happens is what makes up our character. Are we going to blame our circumstances, or perspective roadblocks, or are we going to own our part in what happened?

It’s easy to say, “if this would have happened, or if they would’ve done this, or that, things would’ve worked out for me.” It’s hard to take ownership of failing to meet our goals. It takes courage to say, “Hey, that’s on me, I have to do better.”

Fear makes us want to not take the blame for things that happen. Fear of loss, maybe the job, the relationship, the respect. If people find out that I make mistakes, will they still like me? Our strive for perfection can leave us short of making our goals.

I know that when I have failed at something, many times it was when I tried to do something by myself. Not accepting help. And when that shortcoming happens, I always hear someone say that they could’ve helped me reach my goal. But asking for that help can feel daunting.

I’m here to tell you, Sometimes, we need to own the fact that we need help. It truly takes a village, an army of people in our corner to help meet our goals. And if we can set down that fear, we will see that there are people around us more than willing to help.

Our writer Josh shared a story with me of a time that he made a mistake at a past job, and it would have been so easy to blame a coworker. He almost did, but something inside of him told him ‘no, don’t do it. Own it.’

He says he gets that little voice inside from some advice he learned a long time ago, that whenever something negative happens in his life, there’s always a lesson to be learned. And it’s his job to figure out the lesson. And by doing that, he finds that he grows as a person, and being able to own his mistakes becomes easier.

His story was, he was running a printing press, and a lot of product got damaged, enough that he feared he would lose his job. And during the time it took to make the adjustments to the press to correct the mistake, it hit him: “That was my fault. I could have been more careful. Taken my time to be sure the settings were correct, and paid attention to the details.”

He rushed through it, forgetting the fundamentals. And damaged product. But, he figured out the lesson, owned his mistake, and when it came time to tell his boss what happened, he felt better about being able to admit he was wrong. Yeah, he got in some trouble, but his boss respected the fact that he owned his mistakes, and allowed him to make it right.

And that’s the biggest thing about being able to own our part in things, when it goes wrong, we are often given that chance to make it right. We learn the lesson from that event, and adjust our approach.

When we take responsibility for our actions, we gain wisdom. And even if we do have to suffer some negative consequences, by owning our part, we can make the corrections. If we blame others, or our surroundings, we block off our ability to learn, and grow.

It’s a process. It won’t just come naturally. But if you’re in that overcome mindset, and you’re active in bettering yourself, then this should come a little easier than we think. And it’s so liberating. It actually makes me feel good about myself when I own my part. I know that nobody can ever hold it against me, and I have shown some integrity.

Look, I get it, sometimes I do some things and I look back and I’m like, “seriously, dude? Did I just do that? I’m not that careless. Something else had to have happened.” But when I’m able to own it, I can see that yes, indeed something else did happen. Me. I took the fundamentals for granted, and my goal wasn’t met.

Now, this isn’t a reason for us to get down on ourselves. Absolutely not. This is a way for us to open a door to redemption. Yes, I made that mistake. But I learned from it. And by doing so, I know now what to do to not make that mistake again. It’s one thing to make mistakes. It will happen, I cannot stress that more. But what’s more important is if we keep making the same ones, or are we making new ones. There really is something to be said about making new mistakes.

Josh says that a lot actually. I know I’ve made it sound like he messes up a lot. He doesn’t. But what he does like to say is that at least he’s making new mistakes, and not the same old ones. And that’s progress. That’s taking responsibility and owning the fact that although we strive for it, we are not perfect. And that’s ok.

PrevPrevious“Be on fire, for them,” -Coach Martin Rooney
NextWe Can Rise AboveNext