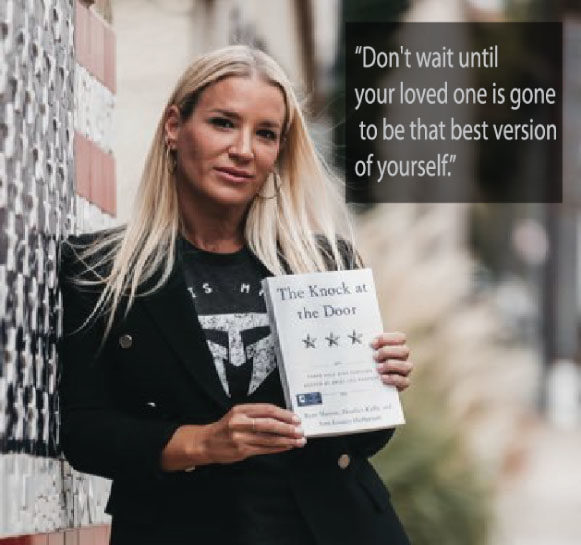 Resilience. Webster’s Dictionary says it’s “an ability to recover from or easily adjust to misfortune or change.” That brings on the secondary word for us to ponder: change.

Change is going to happen. It can be for the better, or it can be something I often call a life ambush. Life’s bullets just come, and it seems neverending. Either way, to overcome and conquer, we need resilience.

On the latest episode of the Overcome+Conquer podcast, we welcomed Ryan Manion. Ryan lost her brother, Travis, in combat in Iraq. For her family to keep going through the tragedy, they created resilience by forming the Travis Manion Foundation.

The foundation strives to unite and strengthen communities by training, developing, and highlighting the role models that lead them. We develop programs, training opportunities, and events designed to empower veterans and families of the fallen, and then inspire them to pass on their values to the next generation and the community at large.

Ryan has, along with others who have lost loved ones in battle, also written a book called The Knock at the Door, which tells their stories of how getting the news that they had lost someone while they were serving their country.

While their stories involve losing someone in combat, it’s important to Ryan that everyone knows that there are different kinds of “knocks at the door”. It isn’t just about the military. “…the book is meant to cover not just the knocks you receive through the military, but the knocks that each and every one of us are going to receive in our life.”

She also lost her mother-who started the foundation-to cancer. Sharing their stories is a way to show that you can create resilience, even when there is none. And if they can do it, anyone can.

Ryan tells of one memory she has with Travis, in high school, they attend a party. During the night, she had an accident, and cut her leg pretty badly. Instead of seeking medical attention, she chose to let it heal on its own, and now, there’s a noticeable scar.

Ryan tells us about that scar, “I was terrified to go to the hospital because then again, my parents would find out, and I have a terribly ugly scar right on my shin. It’s like basically a chunk taken out of the front of my leg. I used to hate it because I remember after that when it scarred up, I was like, Oh my gosh, why didn’t I get this taken care of? Now it’s such beautiful reminder of like an awesome night with my bother. I love that scar now.”

Learning to love our scars is a way we push through the life ambushes. As our proverbial, or physical, scars heal, we build resilience. We will face challenges, and sometimes they leave wounds. It’s how we deal with them that makes us who we are.

The Travis Manion Foundation has a mantra. A quote that Travis said just before his final tour in Iraq, “if not me, then who?” Ryan says the foundation takes that, and tries to teach others how to apply it in their everyday lives.

“Hey, my challenge for you is very simple. Wake up tomorrow and commit to having an if not me, then who moment?” For kids, that’s as simple as like, pick up the piece of trash on the ground as you’re walking. For adults, maybe it’s, “Hey, try not to lose your temper on your kids.”

What are you going to do to help you get through the challenges that life is throwing at you right now? How are you building resilience?

What’s going to be your “if not me, then who” moment?

PrevPreviousHow to Overcome Self-Doubt
Next“Be on fire, for them,” -Coach Martin RooneyNext