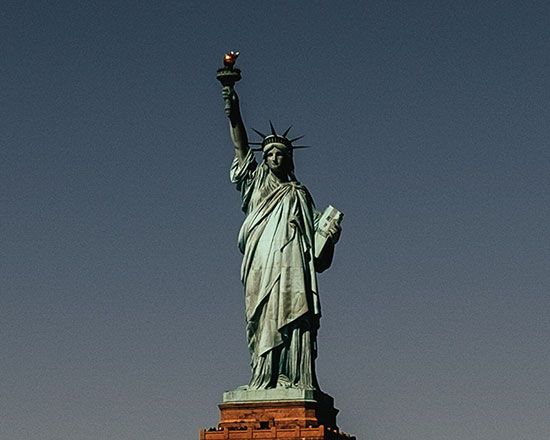 Freedom is a Gift

Our forebears were awestruck at the sight of her; welcoming them proudly, holding her tablets and hoisting her torch high above her head in all her glorious splendor. As they stepped off the ships, they were awestruck and filled with hope at the thought of their new lives as they read the words at Lady Liberty’s base.

Bring me your tired, your poor,
Your huddled masses yearning to breathe free,
The wretched refuse of your teeming shore,
Send these, the homeless, tempest-tost to me,
I lift my lamp beside the golden door!”

They stepped away with hope for they knew they had just walked through the golden door and the new road of opportunity they walked upon was marked with a road sign that bore the name of Freedom.

“Freedom is not a right. It must be fostered, nurtured, preserved, and in the darkest times, it must be fought for.”

Over 242 years have passed since our founding fathers created this great republic founded on the basic principles of life, liberty, the pursuit of happiness, and the Freedoms to achieve all of those things. Early Americans came from all over the world in pursuit of the American Dream; that hard work and dedication, coupled with freedom would enable them great success. While they proudly displayed their heritage, they embraced the fact that they were all now Americans, and were united in Freedom and the Red, White, and Blue. When tyranny and oppression presented themselves at home or abroad, they stood united again and again to fight for the American Dream and Freedom because at the highest level they recognized one simple fact; Freedom is not a right. It must be fostered, nurtured, preserved, and in the darkest times, it must be fought for. They recognized that Freedom is a Gift.

Today, I feel that too many Americans have lost sight of their gift of Freedom. Too many Americans wake up every day thinking that their Freedom will always be there for them because it is their right and they give it no more thought than that. Some of it is ignorance. Some of it is selfishness and some of it is apathy. It is an unfortunate fact though that apathy will destroy a nation faster than any war ever can.

I have had the privilege in my military career to travel all over the world. I have seen the best and worst mankind has to offer. In many countries around the world, they do not have running water, or electricity, or even opportunity for those things. Many places there are no books or schools and in many other places I have been to, if they do have schools, you cannot attend if you are a woman or not from a certain social class. We have none of that here. That is why people from all over the world continue to look to America as the great opportunity, for the principles of the American Dream still resonate strongly around the world and still apply today. It is unfortunate that some people have grown to hate America for her success and even more unfortunate that some of our politicians have bought into this malignant kind of thinking. These same politicians fail to recognize that America has more of her sons and daughters buried on foreign soil around the world in her efforts to assist and preserve Freedom than every other modern day nation combined. These people are the types of people who have never seen the true face of Freedom. They are certain politicians and celebrities who have been chauffeured around and shone veiled versions of society in restricted areas of the world. They cry of the evils abroad yet they have lost sight of the true gift of Freedom. Only those of us who have truly been down into the deep dark recesses of oppressive societies, where in the midst of the darkness and the oppression, you catch a fleeting glimpse in the dirty face of a child, the true hope of opportunity, the Freedom that shines through the darkest night, a spotlight that burns through the darkest heavens and in those moments I always recognize our gift and know we live in the greatest country in the world and in those moments I would like to say to my fellow Americans who have lost sight,

“Apathy will destroy a nation faster than any war ever can.”

Freedom is not a right, it is a gift. You need to always recognize your gift of Freedom because you may never have another opportunity, so you give every ounce, knowing what gifts you have been given, what opportunities you have been presented, what Freedoms you have, that have been paid for with the blood of American Soldiers. There are so many people in this world that are never given the opportunity that you have right now so they hang their aspirations on you to make both America and the world a better place.

Ronald Reagan once talked about that America is a city on a hill, a shining beacon to the world. I like to think of that as a flame or a torch on top of that hill, a lighthouse for the entire world to see. It’s up to all of us, all of you, in everything you do to support that flame and ensure it burns brightly at all times.

Because you see, for 233 years the torch of American Freedom has burned. It has been seen all around the world. Soldiers have carried it with them crossing the beaches of Normandy, on Iwo Jima, Korea, the jungles of Vietnam. It has been held high in Grenada, Panama, Bosnia, and all across the Middle East. When a soldier fell and his flame was extinguished, every American’s torch back home burned a little brighter. Brave men and women continuously are willing to sacrifice themselves to ensure that flame will never go out. Every American citizen of the United States is entrusted with a small part of this flame. Many Americans feed their flame and ensure it burns brightly for all to see, always showing their patriotism, voting, upholding our republic, and looking for ways to support their Country through getting an education, volunteering, pursuing the American Dream, or charitable contributions. Other Americans, they take it for granted, squandering their opportunities, and they allow their flames to burn out. Thankfully, there are those of us who wear the uniform…….who are entrusted with an oath and presented at the start of our military careers, with a part of the flame to keep the torch of American Freedom always burning.

Ten years ago, I lay on the battlefield in a remote land pouring my blood into the soil.

I looked up and I saw Death standing over me…..
and he motioned it was time to go…..
And for a second, a split second….. I thought he was right.
But then I realized, I wasn’t finished….
I had kids to raise to be honorable Americans,
I had a wife to come home to, to love and support as she has always supported me,
And I had a torch of American Freedom to preserve and forever keep burning,
So I stood up, walked 75 yards to the Medevac Helicopter and I came home.
And I vowed once again that I would never allow that flame to burn out while I still hold breath….

And I ask everyone who reads this today to do exactly the same in everything you do,
Ten years ago I brought my torch of Freedom back from Iraq.
I pass this gift onto all of you who read this now…..

What are you going to do with yours?