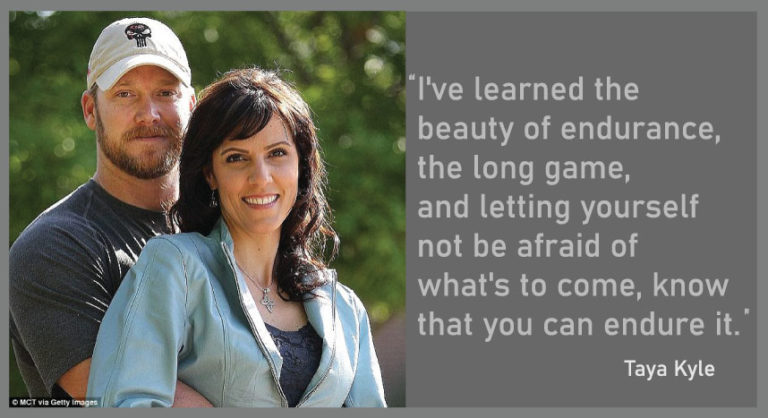 Without Giving Way: Celebrating the life of Chris Kyle

“Let’s be real for just a second. You have to be a lover of innocence, to be a warrior…”

Those words were from Taya Kyle, wife of the late Chris Kyle. Known most notably by the story of his life embodied by the book and movie, American Sniper. Today, February 2nd, 2020, we want to take the time and celebrate the life of a man we lost 7 years ago, Chris Kyle. And tell the story, for those who may have missed it, of his wife Taya. And those words, were about him. How he was off the battlefield. We want to tell that story.

Endurance is defined as, “the factor power of enduring an unpleasant or difficult process or situation without giving way.” We’ve all had times where we had to endure something unpleasant or difficult. But did we come away stronger? Did we look in the face of that life ambush and say, No. Not today. Today, I will not break.”

Even if that isn’t how you handled your most recent life ambush, that doesn’t mean that you didn’t come away stronger. You’re still here. Despite that difficult situation or process. You’re still kicking. And that’s endurance.

That’s Taya’s story too. Having to endure what it is to be a military wife, with her husband in a warzone. And then to have him come home after however many tours, just to lose him the way she did. She’s endured, and so will their story.

We had the pleasure of interviewing her on the podcast when it was called The JR Overcome Show, and so today we wanted to revisit that, because she tells a more detailed story of who he was at home, to his friends. And we want to celebrate that.

Early in the show, she tells about the reason Chris decided to write his book, American Sniper, and how it was important to him that the story was written truthfully, without the overindulgence of war. He knew someone was going to write it, so he wanted to make sure it had it all. Not just the war hero, but also the flawed man, husband, and father.

Taya tells of the time they were first approached about making the book into a movie, and the guy from Hollywood almost left. The guy calls his wife, and says he doesn’t think Chris is into it. But what happens next is the real story, I’ll let Taya tell you in her words:

“Getting into the depths of my soul. When we first met Jason Hall, who is the writer of the American Sniper movie, we were at a ranch and Chris was there. He just didn’t have much to do with Hollywood and all that stuff. He never wrote the book because he wanted attention. He wrote it because other people were going to write about him, and he thought if he did it, he could show his flaws, and he could show the guys he served with. It was a very humble thing.

“So, when this guy comes out saying he wants to do a movie, Chris just wasn’t giving him much attention or anything. The guy literally, Jason who is a very good friend of mine now, called his wife and said, “I think I’m just going to go home. This guy obviously wants nothing to do with this.” At that time, Chris had called and asked if I could bring the kids down to the ranch.

“So, I walked up and he said, “The minute I saw him with you and the kids, I stopped, I texted my wife and I said I’m going to stay because I saw there is more to this guy than what was meeting in the eye.” It’s interesting, and probably divinely orchestrated, that he was able to see that right away, and that’s where he knew the magic was. It wasn’t just another warrior. Nobody needed another warrior movie.

“We needed to know who’s the warrior off and on the battlefield. What’s that dynamic like, and what the home life like? Chris and I knew that the only value to doing this is to represent the community. It wasn’t really ever our story. It’s all of our story.”

That’s part of the Chris Kyle story you won’t hear everywhere. Taya really gets into what and who he was at home, the prankster, the soft-hearted, humble guy, and the father. I’ll share one more little bit of the show with you, but you’ll have to listen to get the rest.

She talks about why she wrote her book, American Spirit. It’s the word we led off with: endurance.

“People would just talk to me, which I love. I’m curious by nature, so I would want them to. They’d tell me these stories about this perseverance and these unique ways that they were giving back. I see the news and I think, “This is what people are telling us our country is about, but this is not what our country is about. This is about what the loud minorities are saying. The majority that are quieter are doing these amazing things.” At some point, I was talking Jim DeFelice, who wrote American Wife and American Sniper.

“I was saying, ‘It feels almost like I’m selfish, or I should be ashamed if I don’t share these stories because they have been healing to me, and they inspire me, and they tell me that the country is not so bad as what we’re hearing.’ It was really that reason. It was very altruistic. I know that good news doesn’t often sell. I know that people love to hear anger. They love to hear chaos. I know that I can increase my following if I would get passionately furious about things.

“I just won’t do it because I’ve got to stay true to who I am, and like we said, endurance. I’ve got to have endurance for the right things, and I’ve got to have endurance for the good things. So, I put out a book that is American Spirit, because I believe that… My faith is that God will get it into the hands of the people who need it, and there will be a ripple effect. I might not know it this side of Heaven, but somebody who needs this book is going to have it. Or, somebody else is going to read it and they’re going to say, “Hey, you need to read this story.”

“I already had one example of a guy who’s a teenager and he was contemplating suicide because he was getting bullied. He told a fellow student, who then told the teacher, and the teacher called me and was saying, ‘I’m thinking about reading American Spirit to show what it’s like to have a hardship and what beauty can come out of it.’ I said, ‘You’ve got read the story about the principal whose in this book and his story started by being bullied.’ He’s changed the world with thousands of kids. People don’t want to leave his middle school because it’s so amazing.”

Chris was a loving, and passionate human being. A good soul that was lost far too soon. Taya goes on to talk about causes that she and Chris held close to their heart, and what it means to her to be in a position today to give back to the ones in need.

She knows that it is Chris that is helping her do all of the work she does today, that without him, none of it would be possible.

So, check it out, if you haven’t yet. But if you have heard it before, please give it another listen. If for nothing else, but to celebrate the life of a humble warrior, Chris Kyle.

Click the link below to listen to the podcast, with Taya Kyle: